This article was originally published on June 7, 2015.

ABC favourite Professor Tim Flannery once held the best part time job in the nation ($180,000pa to head up the ‘climate council’), handed to him by the free spending ‘it’s only taxpayers money’ regime that was the disastrous Rudd-Gillard-Rudd ‘government.’ Tim is famous for many things – chiefly predictions of climate catastrophe that never turn out to be right and which also, strangely, never seem to damage his credibility on the ABC or among the ideologues at the Guardian, Fairfax and Saturday Paper. Whilst Tim’s varied warnings regarding rain falling but not filling our dams, Adelaide as a ghost town, and the Gold Coast under water, can all be easily disproved – since they are meant to have happened by now – and whilst such announcements have an existence now in cyberspace purely for comic value – it seems odd to us that no one has followed up the good professor’s declaration, to a startled audience in early 2011, that the planet itself would soon acquire conscience and intelligence. Surely this should have occurred by now, and if not, why not? Appearing on the ABC’s Science Show, Flannery said: 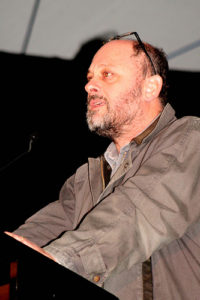 “This planet, this Gaia, will have acquired a brain and a nervous system. That will make it act as a living animal, as a living organism, at some sort of level.”

On this logic, we should all be living on the set of a real life Terminator about now. It’s not the only time, either, that the professor has attributed anthropomorphic characteristics to the eco-system. Interviewed by the British Guardian newspaper a few months later in 2011, he further elaborated:

Deliciously, this interview was captured on You Tube, no doubt in anticipation of it, in due time, taking up its place among the greatest interviews of all time, alongside David Frost and Richard Nixon and so on. It can viewed in its glorious fullness here – https://youtu.be/SeNDSeknn_c.

The Professor’s face, as he explains this ‘global super-organism,’ or what the unscientific and uneducated plebeians in the suburbs might call this ‘Gaia thingy,’ is pure gold. It’s as if he becomes aware, mid speech, of the zaniness of his own words, but simultaneously resolves to carry on anyway. One can almost hear his sub conscience telling him – these gullible fools have already accepted without question the rain that falls not filling our dams, the beach being a thing of the past, and pissed off polar bears rummaging for food in the streets of New York.

A few years earlier, in 2008 and at the height of the global warming scare, Tim made a fabled appearance on the ABC’s Science Show (apparently not a parody program, but one actually taking science seriously) in which he outlined some remedies that might be applied to the ailing Gaia thingy. His comments are worth reading in their naked, uncensored, magnificence:

“Just imagine yourself in a world five years from now, when there is no more ice over the Arctic, when we stand under threat of a rapidly warming Arctic Ocean, when we’re starting to see the first destabilisation of the Greenland ice cap, and all of those things happening because we don’t have a solution, because if things advance that rapidly we simply will not have a solution, in terms of reducing emissions. Then you’ve got to start pulling in your last-ditch efforts. Sometimes we actually cut off a leg to save the patient, and in this case, we may need to inject sulphur into the stratosphere to cool our planet. It’s going to change the colour of our sky, it’s going to change the amount of sunlight we get; but we may need to do it to buy ourselves a bit of time. Unfortunately we have foot-dragged for so long that we are now in a position where those very unpalatable remedies may have to be resorted to, even if they are dangerous.” http://web.archive.org/web/20120106132816/http://www.abc.net.au/radionational/programs/scienceshow/business-leaders-discuss-climate/3273738.

This was the same interview in which, whilst his fellow interviewees (Tim Costello, Rupert Posner, David Lindenmayer, Michael Smith) kept a stoically straight face, Flannery went on to envisage Amsterdam under water (its already only just ‘held up by dykes’ anyway), and not content with the Dutch capital immersed, threw in Shanghai and Singapore as well, for no apparent reason. Not a shred of this was challenged, disputed, or questioned in any way by the ABC’s so called ‘science’ reporter, Alexandra de Blas, who carried on as though in the presence of the Dalai Lama, soaking up the wisdom of Tim without question.

Whilst the assorted ramblings of Professor Tim might sound, at first hearing, somewhat kooky, they are not to be dismissed too quickly. Such sparkling dialogue, after all, earned an accolade as Australian of the Year, and the credulity of the Rudd-Gillard-Rudd regime, leading to an $180,000pa salary for a few hours work here and there in the Prius. Good work if you can get it! But at another level, and upon closer examination, one can see the logic, if one looks hard, in the Professor’s commentary on Gaia, and the link to some of his more fanciful solutions, such as injecting the stratosphere with sulphur. For mere mortals, injecting the sky might seem a silly proposition, but not if the sky is a living super organism, or a ‘Gaia thingy,’ as Tim suggests. You might not be able to inject sulphur into something as intangible as the stratosphere, but you sure as hell can inject a living organism / animal or ‘Gaia thingy’ with whatever you want. What’s more, other men of superior intelligence have already pointed to this cosmic truth. The great Thomas Stearns (TS) Eliot began his 1920 poem, The Love Song of J. Alfred Prufrock, thus:

“Let us go then, you and I,
When the evening is spread out against the sky
Like a patient etherized upon a table.”

Long misread as one of the most famous metaphors in modern literature, Eliot was, of course, here pointing to a deeper truth. The ‘evening’ itself (when it becomes a living super organism or ‘Gaia thingy’ as Tim says it will) might actually and literally be spread out upon a table, waiting to be injected with sulphur by well intentioned, po-faced scientists with very large hypodermics (choose your colour – who’s sick of the sky being blue all the time?), with Professor Tim watching on, arms crossed, from behind glass in the public gallery overlooking the operating theatre. Sound silly? Perhaps. As silly as the planet acquiring a brain and a nervous system and becoming some sort of ‘organism’ or ‘animal’, as silly as Singapore under water, as silly as multi-million dollar desalination plants that aren’t needed? Probably not.

Meanwhile, back on planet earth Gaia, in the year 2015, the ABC (of course) and some other select people were still taking Professor Flannery seriously. Comrade Bob Brown, for one, was busy preparing for the coming one world government, to have its seat in Hobart, and pondering the deep things of the future – such as how to re-word his ‘fellow earthians’ speech when the Gaia thingy becomes a living animal – ‘fellow Gaians’ perhaps…