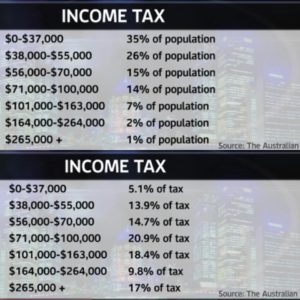 For the last few years we have heard incessant cries from the Green-Left and arm-chair social and economic commentators that the wealthy “One percent” (as they are referred to in derision) are not paying their ‘fair’ share.

I have consistently challenged that contention, as the wealthy few in fact provide the lion’s share of income tax receipts.

As the data shows, the wealthiest 10 percent provide nearly half (45 percent) of all income tax receipts.

The wealthiest one percent alone provide nearly one fifth all of all income tax collected. Tell me again how the wealthy aren’t paying their fair share of tax!?

Furthermore, over a third of Australian income earners contribute almost nothing to Australia’s income tax. As the figures reveal, the bottom 35 percent contribute only 5.1%.

Unfortunately this politics of envy has taken a firm hold in Australia, bizarrely, with university students and others within the political class who generally have a higher income potential than most.

In the second part I will explain why over taxing the wealthy is a bad thing – not for them, but for workers and the rest of the community.