Donald Trump recently engineered the unthinkable on the North Korean peninsula, with the leaders of the North and South meeting face to face, officially declaring the Korean War over and the North announcing it intended to end its nuclear program. Trump did this by convincing everybody, friend and foe, that he was prepared to go to war with North Korea. He did this by bombing Syria, and by tweeting. 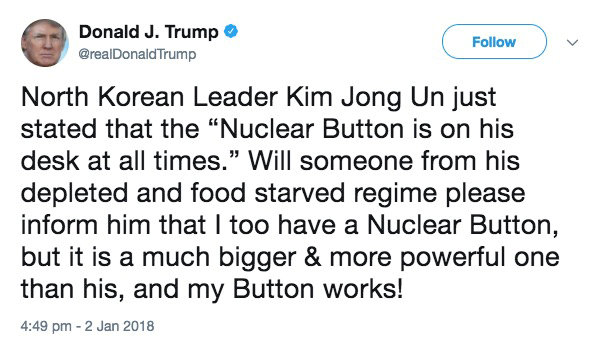 I have long given up any expectation that our globalist leaders or the Dinosaur Media will learn anything from their mistakes, thus their reactions to Donald Trump’s announcement that he will withdraw from Obama’s treacherous Iran nuclear deal is no surprise:

“Donald Trump has declared the United States will withdraw from the Iran nuclear deal, describing Tehran as a murderous regime which must never be allowed to develop a nuclear bomb.

In his most sweeping foreign policy decision as president, Mr Trump said the US would now reimpose the toughest possible sanctions against Iran and against any other nation that helped it to build a nuclear weapon capability.

“We cannot prevent an Iranian nuclear bomb under the decaying and rotten structure of the current agreement,’ he said.

“In just a short period of time the world’s leading state sponsor of terror will be on the cusp of acquiring the world’s most dangerous weapon,” Mr Trump said.

“We will not allow a regime that chants ‘Death to America’ to gain access to the most deadly weapons on earth.’

Australia’s infiltrator PM said something unintelligible about how multilateral agreements are the best way to ensure peace, but let’s ignore that and skip to this – Donald Trump understands the power of displaying the will to use force:

“The United States no longer makes empty threats.. When I make promises, I keep them.”

Kim Jong Un understands this. That’s why he’s going to give up his nukes. He’s a smarter man than the leaders of the US’s European allies:

“After Mr Trump’s announcement, France’s President Emmanuel Macron tweeted: “France, Germany and the United Kingdom regret the US decision to get out of the Iranian nuclear deal. The international regime against nuclear proliferation is at stake.”

Firstly, I know it’s not an argument, but:

Secondly, Donald Trump only last week forced the second most intractible conflict on he planet to end and forced a country with nuclear weapons to start the disarmament process, yet Macron thinks that Trump using exactly the same gameplan against Iran is putting the “international regime against nuclear proliferation” at stake.

Thirdly, there is no “international regime against nuclear proliferation”. The “international regime against nuclear proliferation” did not stop India, Israel or Pakistan gaining nuclear weapons. They wanted nuclear weapons, so they got them. It’s called making facts on the ground. It did not stop nuclear expertise being passed on to Iran and North Korea. Some may point to fact that South Africa gave up its nuclear weapons, but this had nothing to do with the NPT and everything to do with the fact that Nelson Mandela was a communist and an idiot, although it did at least save us from the disaster of having nuclear weaponss in the hands of the functionally retarded.

To repeat, there is no international regime against nuclear proliferation. There is only power. To the extent that the US does enter international agreements on nuclear non-proliferation, it is only to back up those agreements with its own power. Handshakes and signatures do not determine nuclear policy. Nuclear weapons and Mutually Assured Destruction determine nuclear policy.

Barack Obama understood power, and as a Muslim and a communist who hates America he did everything he could to reduce the power of the United States and increase the power of the rest of the world by making it easier for other countries to get nuclear weapons, and undermine the US nuclear deterrent. Donald Trump understands power, and he is doing everything he can to reverse the work of that Trojan Horse.

As for the Europeans:

“French president Emmanuel Macron, British prime minister Theresa May and German chancellor Angela Merkel issued a joint response expressing “regret and concern’’ over Mr Trump’s withdrawal of the US from the JCPOA but emphasised their continuing commitment to the deal.

”Together, we emphasise our continuing commitment to the JCPoA,’’ the statement said.”

The JCPoALGBTI is dead and there is nothing the Europeans can do about it. The USA has safeguarded Europe for 73 years and they have no option but to play along. The USA has the ability to kill Iran 100 times over and it has a President who has convinced everybody he is prepared to do it. That is all that matters. The Iranian President may be trying to push the soyboy multilateral line:

“This is not an agreement between Iran and the US. For US to announce it’s pulling out, it’s a multilateral agreement, endorsed by the UN security council resolution 2231, America’s official announcement today showed that their disregard for international commitments.”

But this statement reveals he knows the 4D chess game is up:

“This is a psychological war, we won’t allow Trump to win.” 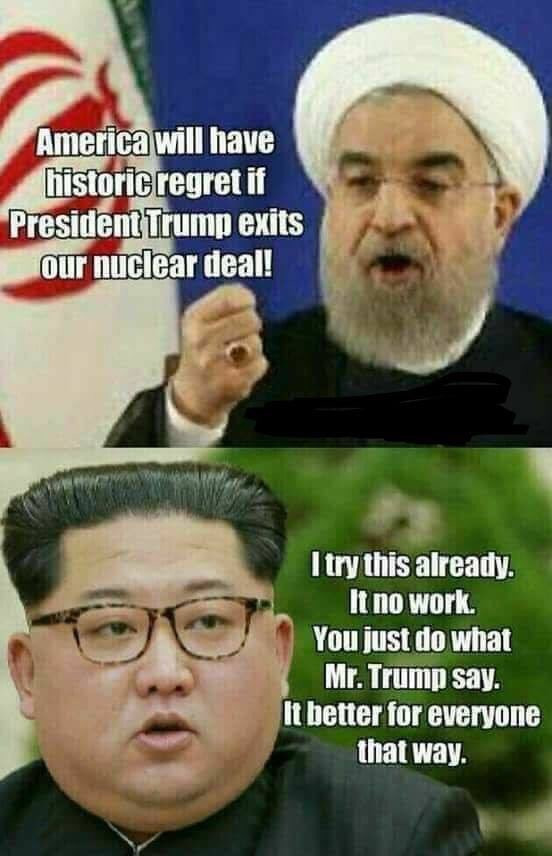 Iran will announce its intention to base its electricity generation on its vast oil reserves within a year. If I am wrong, and this leads to a nuclear arms race in the Middle East, we still win: