Self confessed fatty, Brigid Delaney, writes for the Guardian.

Admitting to working for the Guardian is amusing enough, but Brigid has recently doubled down by willingly penning an entire column on how Donald Trump has turned her into a land whale.

Delaney’s sorry tale of Fat Shaming herself apparently dates to just before the Trump election victory when Brigid was foolish enough to make a bet with her gym instructor over who was going to win. She lost, and rather than acting like any other (cough) ‘normal’ leftie and running herself ragged looking for Russians in Trump’s sock drawer, poor Brigid came to associate the gym with Trump, and stopped exercising.

How she came to associate Hillary with stuffing her face with franchised takeaway food is less clear, but she latched onto that concept and now claims she has lost so much strength and fitness she is no longer able to open her own jars.

(Unspoken implication? She now has to get a MAN to do it. Poor little petal.)

Now while this is all quite openly laugh worthy, and her saga of refusing to take responsibility for her own actions and lack of self discipline has been openly mocked by other members of the Hate Media, we here at XYZ are more inclined to offer help. You see, before Brigid’s tale of self destruction entered the junk food hoover stage, our brave Clinton supporter had one last visit to the gym where the bet-winning owner made her pull a sled as part of her training session.

Ms Delaney’s thoughts on this strength and endurance building process?

“…how was that going to help me when the world had been destroyed by
nuclear weapons or climate change?”

Well young Brigid, thanks to the power of the internet we can actually
answer that question!

This little piece of animation was published by Bethesda Softworks in mid 2015 as part of their promotion for the then unreleased game, Fallout 4, and in many ways completely answers Brigid’s questions about the importance of pre apocalypse preparation. The video was one of seven and we here at XYZ in fact suggest that Brigid may wish to watch them all.

The fourth one is about Charisma. 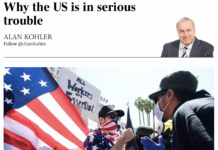 America is the first domino