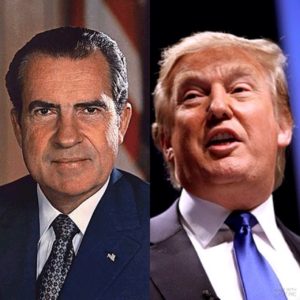 Media coverage of Donald Trump reminds me a lot of how the media treated Richard Nixon, framing him forever as the biggest crook ever to hold office. The entirety of Nixon’s legacy, even if you ask a U.S. Millennial who is clueless about the vast majority of their Presidents, is the Watergate scandal. Watergate involved a break-in, and subsequent surveillance of the Democratic National Committee headquarters. It also included alleged harassment and intimidation of political activists and opponents using elements of the FBI, CIA, and IRS. Kind of like what the DNC itself did to Bernie Sanders, and a lot like what the Obama Administration did to Dinesh D’Souza as punishment for releasing the documentary Obama’s America.

For leftist media, Watergate represented the ultimate gotcha moment. Young journalists who are now veteran journalists shamelessly overlooking far more nefarious behaviour by the Clinton Foundation gleefully tore down an administration as brutally as they could. Aside from Watergate, this Nixon fella must have been pretty bad right? He must have destabilised a bunch of countries, hindered prosperity, really hurt America. Well, not exactly…

The reason that left media were out to get Nixon so badly, even before a whiff of Watergate, was simple. They couldn’t stomach the concept of a Republican President doing such a damn fine job of solving the conundrums that they themselves only lamented about. They couldn’t handle the fact that the son of a gas station owner had made it on his own without a big government safety net. It drove them crazy that ‘Tricky Dicky’ was a man that got things done.

President Nixon founded the Environmental Protection Agency, and oversaw the passage of the Clean Air Act, Clean Water Act, and the Marine Mammal Protection Act. He was an environmental pragmatist who realised that genuine practical actions spoke louder than the warm and fuzzy words of the hippies that hated him, but left rubbish everywhere they went.

Nixon also oversaw the peaceful de-segregation of Southern schools. This put ‘Tricky Dicky’ squarely in the sights of Southern Democrats with Klan ties. Democrats of course are the party of the KKK. Republicans have always opposed segregation. When Watergate brought Nixon down, a lot of Southern racists were quietly celebrating.

In 1970, Nixon’s no-nonsense leadership staved off a second Cuban missile crisis in much the same way Kennedy had earlier. You’d never know about it though. Liberal Hollywood aren’t so enthusiastic about making movies where the subject matter is a Republican President (Nixon no less) averting possible nuclear war.

Nixon saved Israel from being wiped off the map with a massive foreign and military aid injection in 1973 when others in Congress (especially Democrats) seemed fine with standing by and allowing what could have been the biggest case of genocide since the Holocaust. He enabled a good few decades of peace in the Middle East until George W, Obama, and Clinton came in to set the region aflame with their destabilisation.

Nixon signed the Paris Peace accord in 1973, ending the war in Vietnam once and for all. If only Barrack Hussein Obama could have engineered such a smooth and bloodless transition from wartime to peace when he withdrew troops from Iraq. Nixon also tirelessly worked to repatriate P.O.W’s from Vietnam, and held the largest reception in White House history in their honour. One can’t help but think that Nixon disregarded potential political damage by associating himself so warmly and generously with those who had served in a politically unpopular conflict, while Obama and Clinton keep those who are serving in a politically unpopular conflict (police with targets on their backs from the BLM movement) very much at arms length.

He also ended the policy of forced assimilation of Native Americans. He returned sacred lands, and became the first president to give them the right to tribal self-determination. Whether this was ultimately a good or a bad thing is in the eye of the beholder, as with all of the above achievements of Nixon’s time in office.

The point is that no self-respecting left-leaning journalist should have been so eager to actively destroy such a man whose heart was in the right place, and who achieved all of these things regardless of political affiliations. And the slander began well before Watergate for no good reason whatsoever. All that it came down to was that Nixon wasn’t on their home team, wasn’t their brand of cigarette, or from their political party. And in many quarters it was even more disturbing than that. Nixon was threatening too much positive reform too quickly. He had upset too many career politicians struggling to maintain the status quo, and like Kennedy, he had to go as soon as the first possible excuse arose.

Watergate was that excuse.

Watergate was admittedly a little shady, but really had nothing on Benghazi, Hillary’s e-mail scandals, the goings on of The Clinton Foundation, or the corpses that seem to pile up every time there’s a loose end the Clintons need taking care of.

Trump is suffering what I would call the Nixon effect. A systematic inexplicable media hit-job on a man who seems to share more DNA with Bernie Sanders than he ever will with the very mysterious Barrack Obama, Crooked Hillary Clinton or Cuckservatives like Cryin’ Jeb Bush or Little Finger Paul Ryan.

The media, both left and right, are afraid of this new incarnation of the Republican Party, because like Nixon (and Reagan), Trump threatens innovation, change, and most importantly reform to politics itself. As Nixon has proven, this kind of media character assassination has been implemented before, and to great effect. And Trump isn’t even President yet. One can only imagine the level of vitriol if he actually makes it to the White House.

The only thing that will work in his favour is that even his opponents in the electorate have become desensitised to the media propaganda machine. Many of us have become so over saturated with it that we wouldn’t believe anything the media said about Trump even if it were true. Had the media given Trump a fair hearing from day one, or at least feigned impartiality just a little, in all likelihood we would have had a Trump Watergate moment by now either forcing him to withdraw, or at very least resulting in a Clinton landslide.

The recent second amendment gaffe framed as advocating that gun owners should go after Clinton could have been it. Instead, most people shrugged as if to say ‘whatever’ while shrill leftist media pundits looked decidedly hysterical and unreasonable. As he has said himself, Trump could literally shoot someone without losing any of his supporters.

But he will need to remain squeaky clean legally. The media have proven that they will let shady Clinton Foundation donations, criminally negligent conduct, and mysterious deaths slide in regard to Hillary. But if Trump so much as defends himself if he is rushed on the podium and is charged with assault, he could well be ousted in his very own Watergate.