Wow Satan really screwed up the optics on this Israel Folau lynching. 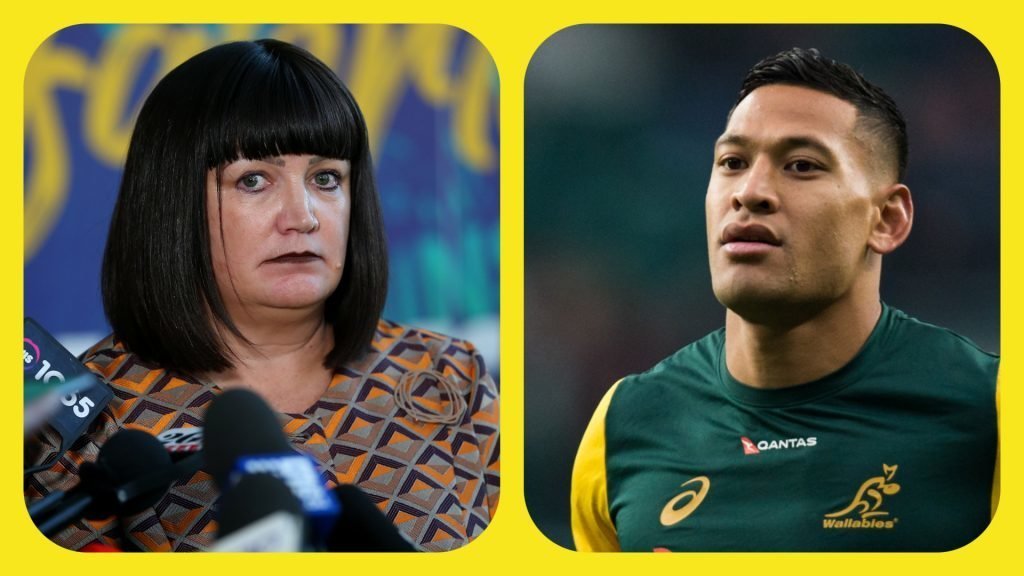 And going after his wife Maria was just dirty and low. And stupid.

Netball great Liz Ellis has slammed the sport’s peak body in Australia after it refused to sanction Maria Folau, who plays for Adelaide Thunderbirds, for re-posting her husband’s fundraising campaign.https://t.co/drMgN3xqX0

Which of those people would you want to be friends with?

Which of them looks decent, stable and normal?

Which of them would you let be alone with your kids? 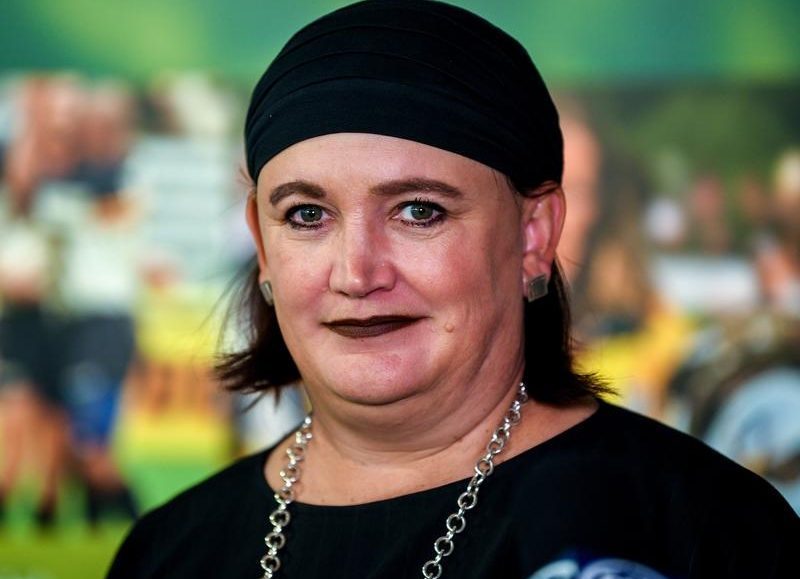 Satan really needs to have a chat with his marketing team.

Of course, part of being a Christian is that we don’t hate people. There’s no point. Whatever force or agenda Raelene Castle thought she was advancing by sacking, vilifying and robbing Israel Folau for being Christian is also the force which enslaves her. She’s lost in the darkness, and so hates anyone who brings the light of truth (John 3:20).

So pray for Raelene.

Both of them are working in the dark.

What’s been striking though is the savagery unleashed on social media against Israel Folau for saying that sin exists. I’m very familiar with the nastiness of the postmodern left, but the vitriol which has been poured out, and which the media has encouraged, has been shocking.

It’s been Kristallnacht for Christians these past few weeks.

Full TFF. My Saturday column.
Israel, enough is enough . . . why don’t you just go fund yourself? https://t.co/s3SvjmkCBM via @smh

For three million I will make sweet love to Israel Folau. We can even do it in a church to make sure it’s not gay sex. Call me @IzzyFolau. #IsraelFolau #Gofundme #blessed #Iamserious

As usual, envy is at the root of the left’s hatred.

You’d think a “Christian” would raise money to help vulnerable kids, not to fight a legal action to allow him to vilify them while keeping a $5 million job. #IsraelFolau https://t.co/1S6a4PNXOz

If you have spare cash and donate it to #israelFolau‘s legal gofundme and not the needy, you’re a cunt.

Thank you for coming to my TED Talk.

The haters and homophobes have been waiting since the YES vote for a trigger to set off a “religious freedoms” campaign as revenge. #Folau’s contractual dispute gives them that trigger and a rallying point for bigotry dressed up as concern for “religious freedom”.

Some of the hate is even coming from people who claim to be Christians.

As a Christian, I am disgusted by the homophobic bigotry of #IsraelFolau and the #AustralianChristianLobby. I never hear the ACL doing anything but vilify and attack our #LGBT community, incl #LGBT teens. They are a vile hate group. Nothing more, nothing less. #NotMyChristianity

#IsraelFolau is asking for money under a false claim. Please do not give to his #Gofundme campaign. pic.twitter.com/TmqsESHx4g

I don’t think Israel’s too concerned though.

We can dismiss 90% of the left’s criticism as coming from the usual logical fallacies and double standards. Maintaining double standards against Christians is built into the philosophical bedrock of New Left cultural Marxism. If a Muslima sportswoman on a couple of million had been fired and slandered for saying the truth that Allah wants gays put to death and got on GoFundMe for support, the left would put on hijabs and throw themselves off roofs in support for such a brave and stunning display.

They just hate Christians. That’s all it is. And because SJW’s always project, they call us haters.

The criticism which has been made against Israel for moral hypocrisy, though, needs a more thorough response. The type of criticism that goes something like: if Israel was a ‘real Christian’, he’d be spooning out organic vegan soup to black disabled dyslexic transgender homeless refugee children instead of asking for 3 million for a lawsuit.

The type of shit David Marr goes on with, constantly.

The common denominator of these types of arguments is that they are not intellectual criticisms of Christianity, they’re moral ones. These people are ignoring rational points based on evidence in favour of emotional ones based on button-pushing. They’re not talking like philosophers. They’re talking like priests.

Postmodern leftists respond to Christianity by seeking to point out moral hypocrisy, based on misrepresentations of the nature of the Christian God. They hold Christians to impossible moral standards and then call us hypocrites when, according to them, we fail to meet them.

This strategy has been commonplace for cultural Marxists since Saul Alinsky literally wrote the book on how to be a good little servant of Luciferian globohomoism.

The thing is, once you start using the language of emotion to advance theological concepts, you’re not doing physical philosophy anymore. You’ve strayed into metaphysics. Into religion.

The self-righteous fanatics of postmodern leftism aren’t secular atheists at all. If they were secular atheists, they wouldn’t care when Israel Folau reminds people that God says the anus is not a sex organ. They’d just shrug and call him crazy.

That they can’t ignore what he says shows that they don’t think he’s simply wrong. They’re offended. They’re offended at his blasphemy. They don’t see him as a person with wrong ideas. They see him as an evil heretic who must be persecuted by the righteous saints of the holy and universal church of globohomo.

The god of inclusivity demands it, because globohomo is a religion. And the stunningly funny counterpoint to that is that Biblical Christianity is not one.

God really has a wicked sense of humour.

The millions of people like Raelene Castle produced by our country’s neo-Marxist education system are intensely religious. They follow an inverted form of the moral law of God which in many ways echoes the oral law of the rabbis that Jesus condemned during his ministry, which became the basis of Talmudic Judaism, and is the spirit of anti-Christ (1 John 2:22).

They are utopians, believing that they are part of an enlightened segment of humanity which will bring about a more perfect world through the application of their beliefs, by force if necessity, upon the rest of the world. They are anti-Christians, in that they see Christian belief as the primary stumbling block to achieving this perfect world to come (1 Cor 1 :22-24). They are intensely moralistic, believing that their works and the works of those who share their religious beliefs redeem them and make them eligible to police the beliefs and actions of others. They demand doctrinal orthodoxy, punishing any who seek to deviate from the tenets of the faith. They celebrate festivals and maintain a religious calendar of events honouring the gods of diversity, sodomy and female supremacy.

They have temples and holy sites.

The Yankees are proud to commemorate the 50th Anniversary of the Stonewall Inn uprising by dedicating a plaque in Monument Park to recognize the need for equality and acceptance for all. pic.twitter.com/Z4xxPXSAV9

And even have neo-kosher beliefs about the morality of food.

#Melbourne: Onlookers take photos of ‘barbecued’ human who reminds everyone that flesh is flesh this #AustraliaDay. pic.twitter.com/h3uwJzqBy0

And when they criticise Christianity, they’re criticising a form of it which doesn’t really exist for most Christians anymore. There has been a return to Biblical Christianity over the past few decades in the church, which has seen Christians abandon the external trappings of religion for the internal and eternal relationship with God that was the heart of Jesus’ message.

The religion that the globohomo fanatics criticise is Churchianity, the institutionalised and legalistic perversion of the gospel which man created over the centuries, and which is dying out. Perhaps it died as it was replaced by globohomo. Either way, it was never what Jesus wanted. It was man’s creation.

Religion is what men do for the gods, to please them. Christianity is what God has done for men, to please Himself. There’s nothing left for men to do but believe, and walk with Him like Adam did in the Garden of Eden. Christianity is simply God fixing what we fucked up in the first place. That’s what Israel Folau wants everyone to know.

These self-righteous hypocrites like David Marr and Raelene Castle are the Pharisees of postmodernity, loudly proclaiming their own righteousness as they plot to steal, kill and destroy (Luke 18:9-14). Their souls are black. They are not good people.

And neither is Israel Folau. Neither am I, and neither are you. That’s the point. The Book of Isaiah calls human righteousness filthy tampons in the sight of God (Isaiah 64:6).

As a general rule for life, the better a person thinks they are, the worse they are. There is nothing good about us outside of Christ, and no amount of virtue-signalling will change that.

Unfortunately for people like Raelene, that knowledge will probably arrive too late.

At least Israel tried to warn her.