Remember a few years ago almost when XYZ first reported that the Grand Solar Minimum was beginning and the effects of global cooling would soon begin to hit? 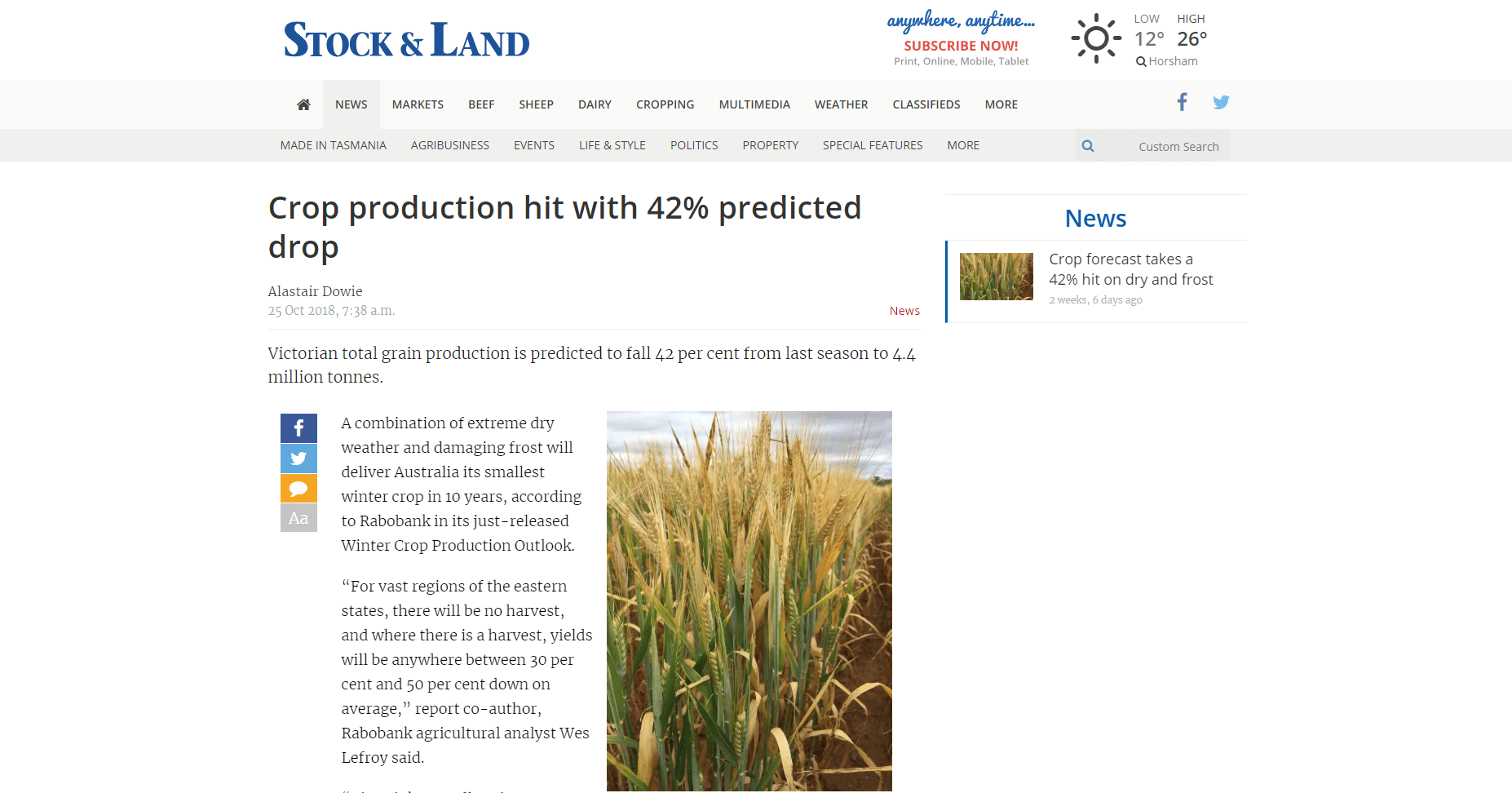 The potato harvest hasn’t been reduced just in Europe, too. It’s happening across the northern hemisphere. 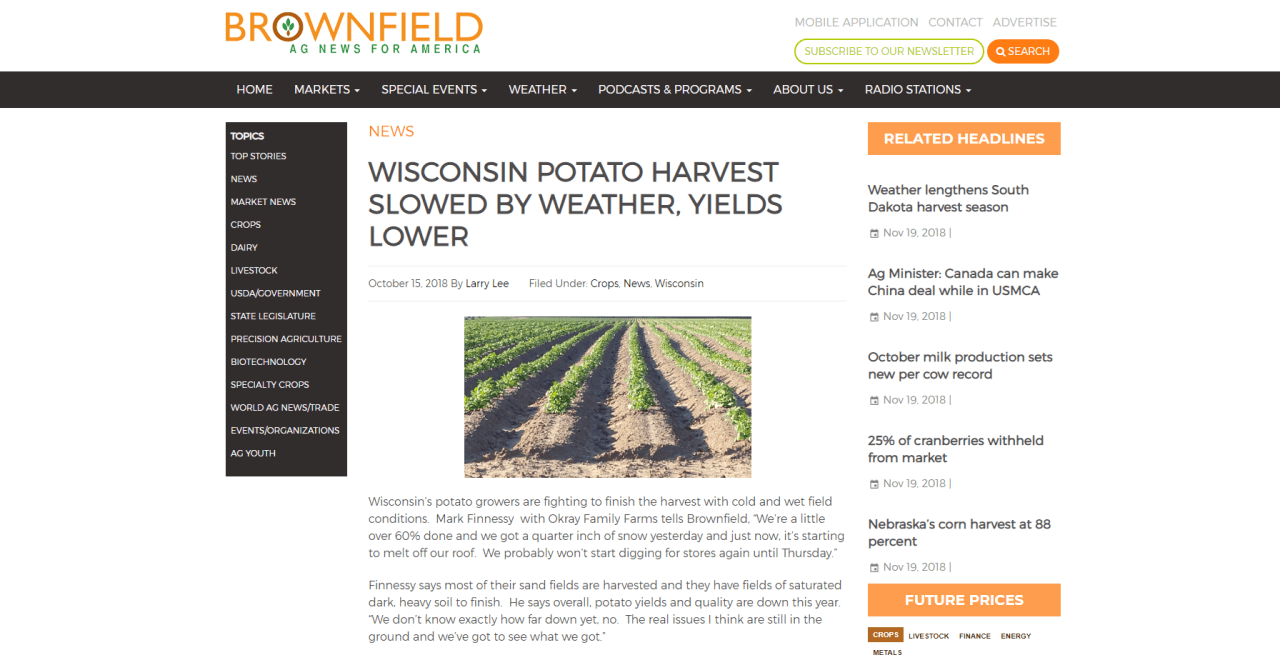 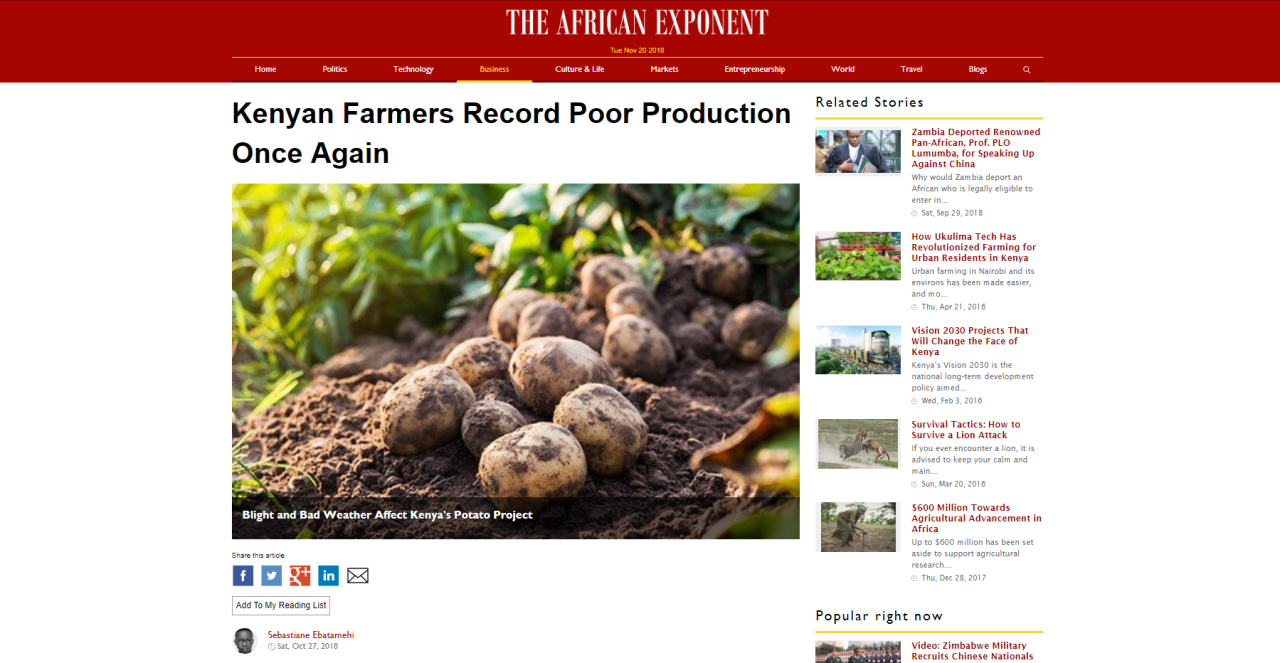 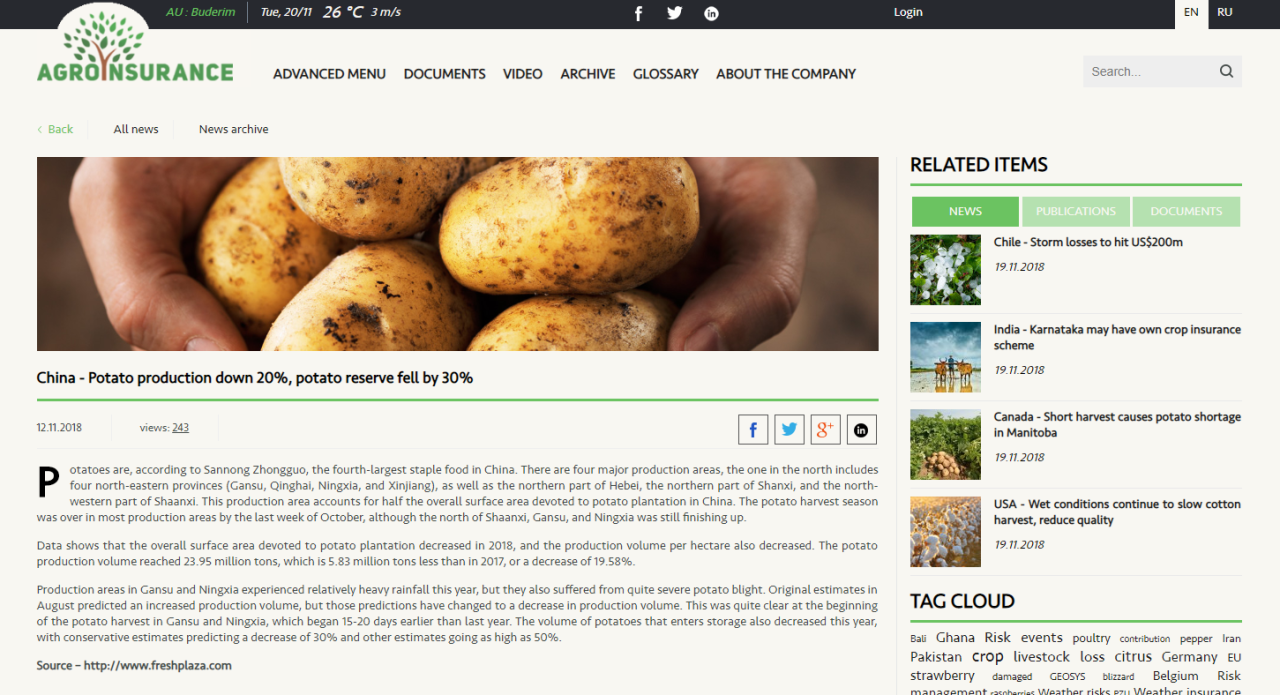 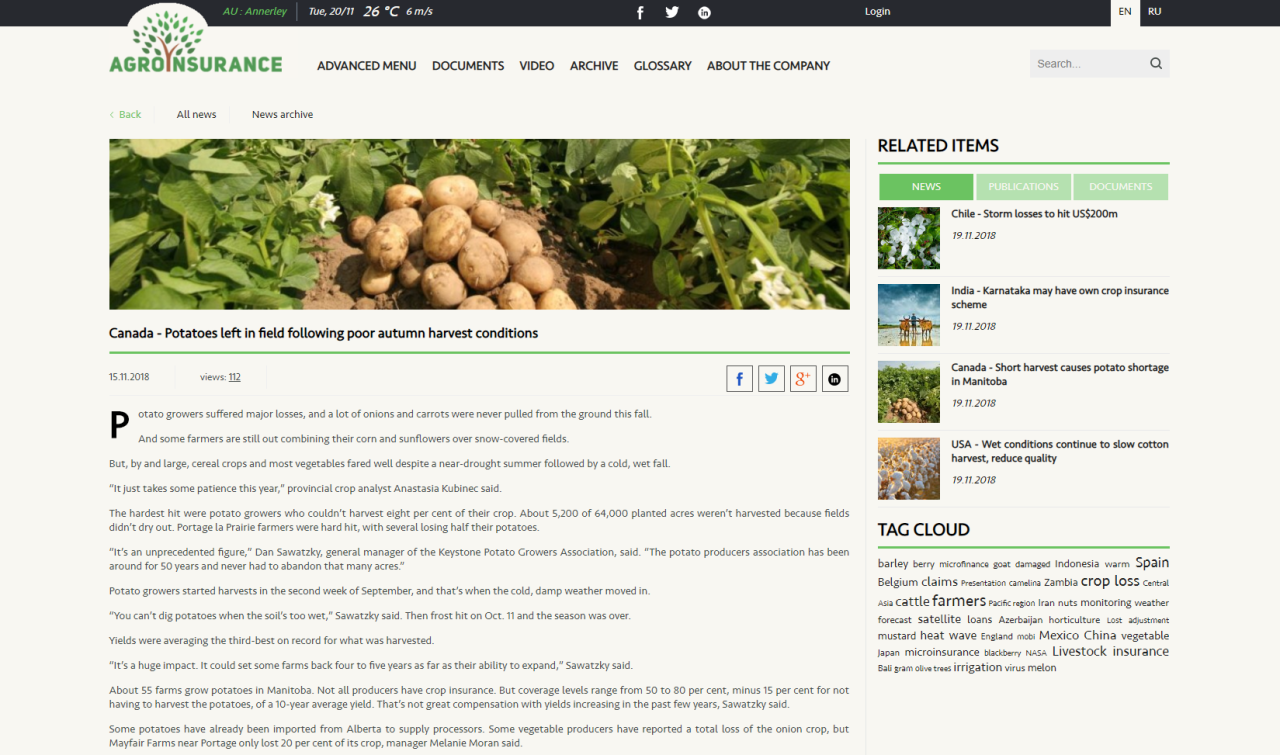 “It’s an unprecedented figure,” Dan Sawatzky, general manager of the Keystone Potato Growers Association, said. “The potato producers association has been around for 50 years and never had to abandon that many acres.”

Potato growers started harvests in the second week of September, and that’s when the cold, damp weather moved in.

“You can’t dig potatoes when the soil’s too wet,” Sawatzky said. Then frost hit on Oct. 11 and the season was over.

The 25-30% reduction in potato yields across Europe will double the price of potatoes across the continent. The lying media is blaming it on man-made global warming, of course, because driving your car causes farts which make the potatoes sad, or something.

Agriculture, particularly the industrial-scale monocultures our society is built around, requires regular and predictable weather to be viable. As the planet goes into a Grand Solar Minimum, the seasons go haywire. This is devastating for crops, and our entry into this current Eddy Minimum has only just begun. According to Agriculture Victoria Seasonal Risk Agronomist, Dale Boyd, it wasn’t just the unseasonable cold and frost events which damaged crops, but the lack of rain during August and September.

It’s not a straight-line cause and effect. Rather, the risk to agriculture is that the complex weather dynamics which crops rely on become unstable, reducing not only the quantity but also the quality of food.

A leading pioneer in the study of Grand Solar Minima and their effects on the planet has been solar physicist Professor Valentina Zharkova of Northumbria University. She has been attacked savagely for her theory that the weakened solar magnetosphere during a Grand Solar Minimum is the main factor in driving global cooling on Earth, but she is increasingly being vindicated as global cooling progresses. Recently, Professor Zharkova gave a lecture to the Global Warming Policy Foundation. You can view the lecture below, but it’s heavy-going. Here’s a summary of her main points:

Professor Zharkova’s research team have also demonstrated that temperature fluctuations on Earth, Mars and Jupiter all correlate to the solar cycle.

And, starting this winter in the Northern Hemisphere, everyone is going to realise that something is very, very wrong.

So much for ‘global warming.’ Earth is cooling at a record pace http://t.co/Kig0fLOWRK

It’s freezing in New York—where the hell is global warming?

And so do the Russians. 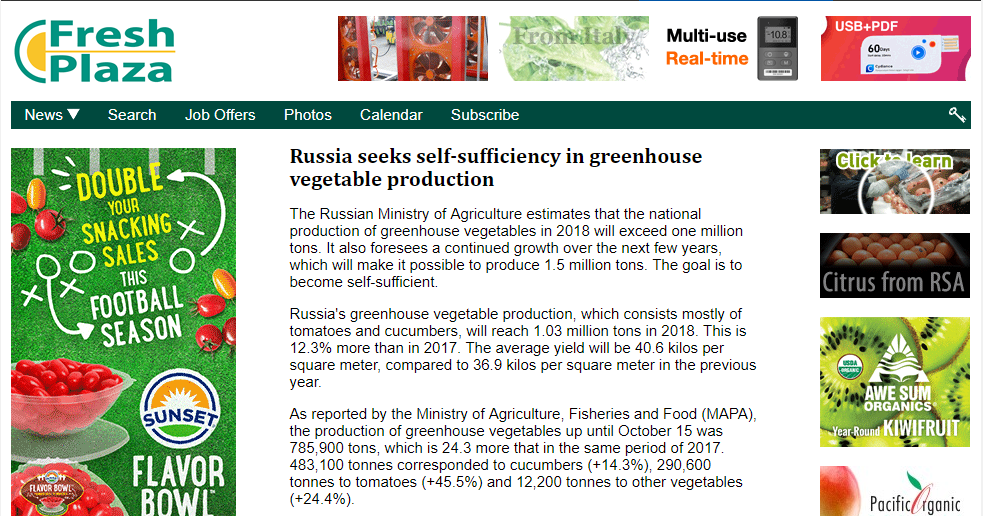 The Don also knows that they’ve been lying to us.

They’ve been lying to us for decades.

The oligarchs have known about this. They’re not stupid. The politicians they control are, and the journalists those politicians rely upon for their image are, but the real power players are not. If they were stupid, they wouldn’t win all the time.

And if they’re not stupid, then they must just be evil. They want Western civilisation destroyed and the rest of the world depopulated. There is no other workable explanation for why the climate cult has been pushed onto the people of the West, while East Asia has been given everything they need to industrialise and surpass us. 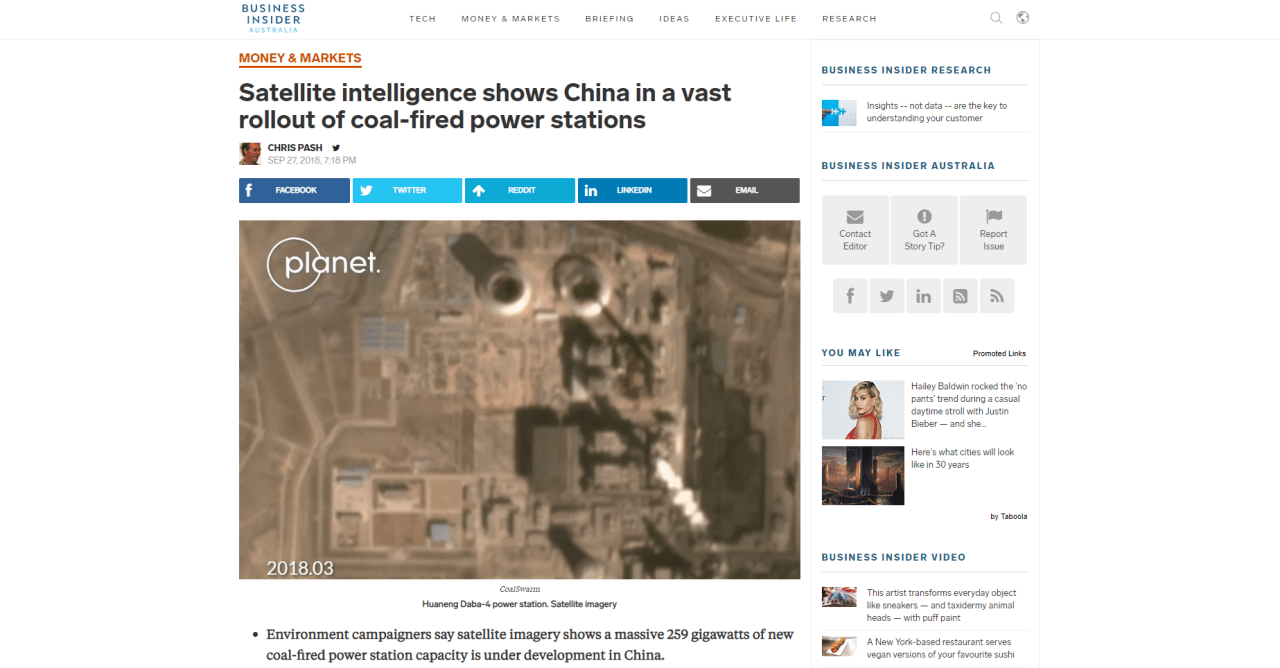 We will pay dearly for our stupidity and the corruption of our elites.

The purpose of this article is not to scare you. It’s to prepare you. This thing is real.

We have made plans at our house to become food-independent within three years. We must go back to being food producers as well as consumers, like our forefathers were.

For us, it’s also been an opportunity to reimagine what we think of as ‘the good life’.

That’s not me, but you get the picture. We’ve chosen to focus on indoor growing because, although most parts of mainland Australia will not experience glaciation, drought will be widespread, sunlight will be reduced, the weather will become more erratic and average temperatures will be significantly lower.

And while Australians might not experience starvation, I don’t think we’ll want to eat what Big Sister comes up with as solutions. 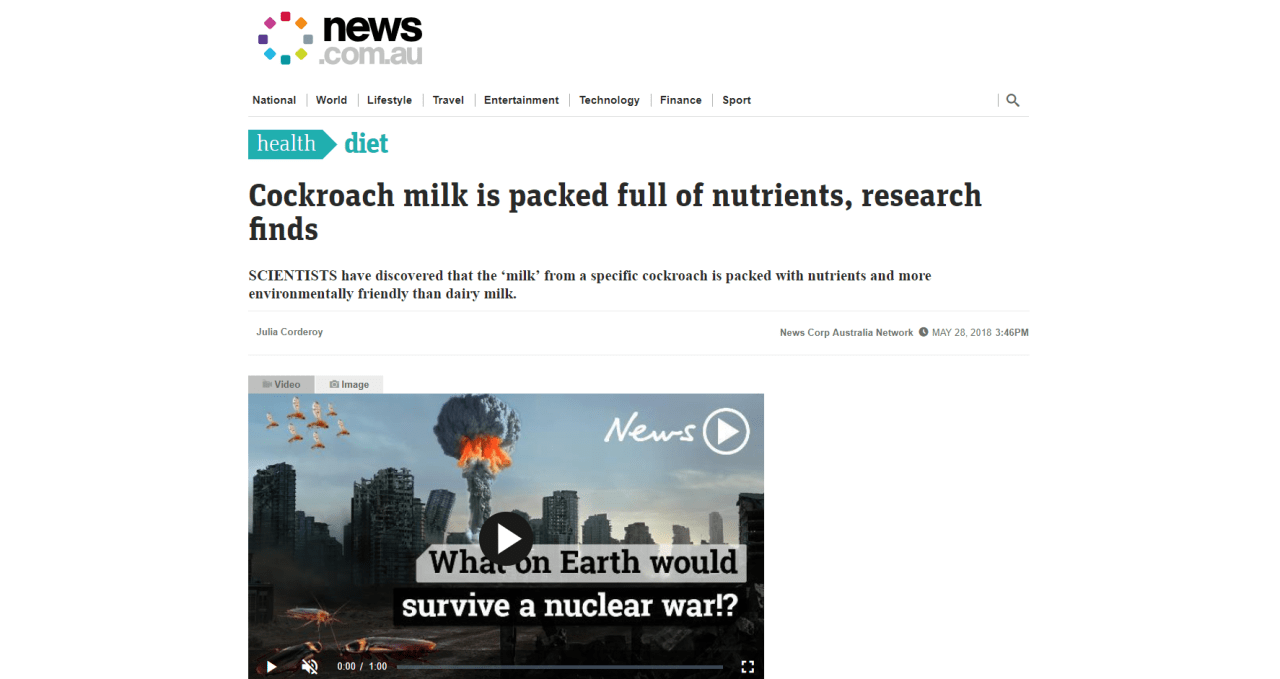 If you’d like to learn more about the coming ice age, check out Ice Age Farmer, Adapt 2030 and TruNews on YouTube.