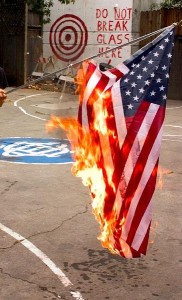 Does the Western world have a death wish? Is it certifiably suicidal? Are the once great, proud, and free nations of the West marching inexorably to a passive end, blinded by the mask of political correctness and multiculturalism, and a culture of offence taking? Even in the last few days the Australian Prime Minister, and a willing press, is perpetuating the myth that an unnecessary climate of fear had been fostered among the Islamic population in response to terrorism, which the left wing press are always wont to play down – and then a fifteen year old of “Middle Eastern appearance” carried out an attack on a police station in Sydney in which one two people were killed, for no reason whatsoever it seems. No one dares even name, let alone address,the greatest social fear that exists in relation to Islamic terrorism – it’s not the fear of the Muslim community in being corporately tarnished and ostracised, but the fear of the rest of the community in being branded a “racist”.

Around the western world today, Christians are being intentionally singled out in shooting rampages, such as that which took place in Oregon just a few days ago. When it seemed African Americans were the target of violence on account of their ethnicity, the American authorities, from the President down, assisted by a willing media, went into a frenzy. Christians being intentionally executed in a community college provokes no such response.

In Britain, an Iranian woman who belongs to a society of “ex-Muslims” was banned from more than one University campus because she might offend or insult that institutions seemingly very fragile student body who continued as adherents to that faith. In Australia, a radical Islamic group whose leader justifies wife beating, thinks homosexuals should be executed, and has been quoted as saying that every Muslim should be a terrorist, has no such trouble getting as much access to a University campus in Melbourne as he and his group want. In recent days an anti-abortion speaker has been deported from Australia, and an American rapper refused a visa on the grounds of a past conviction for domestic violence – but the Islamist hate preacher has no problem finding a pulpit, and there are no petitions circulating among student groups, unionists, or other left wing bodies, to shut him down.

Not only will we, in the West, fall into a limp silence, and perpetuate a deluded pretense that it is only a tiny unrepresentative minority, when it comes to Islamic fanaticism, but we will hand over our public facilities for the use of groups who hate our culture and traditions, and who would want to impose the nightmare of sharia law on us all. This really ought not surprise us that much – when a gunman carrying the back flag of Islamic terrorism walked into a Sydney cafe last year and commenced a long siege that ended in the deaths of several innocents, the Twitter hashtag campaign ‪#‎Illridewith‬you that sprang up all but immediately was not in support of the actual victims, but in support of a woman in Islamic dress who was, apparently, fearful of catching pubic transport among the racist bogans who populate the suburbs of Australia, and needed the protection of enlightened passers-by in order to make her journey. It made no difference at all to the campaign subsequently generated, and perpetuated by a willing media, that the incident which precipitated it was admitted by its very source to be a hoax. At the time of writing, there was no comparable hashtag campaign to accompany frightened Christian students to their place of schooling.

The matrix of events across the world in the last few days really does suggest that the nations of the western world, once built on the values of the Enlightenment, on democracy, and the Christian faith, really do have a death wish. It’s one seemingly happily fueled and given impetus by the enemies within, those legions of self righteous, and self loathing, “useful idiots” on the left, only too keen to sink the metaphorical boot into their own culture, history, and tradition, and to hasten its decline. If the West really does have a death wish, and the useful idiots really do want it to die, then radical Islam will be only to happy to be the beneficiary of the resulting corporate suicide.