Firstly, it needs to be stated that that if white nationalist views are cranked to 11, the alt-right view will sit notched at around 7 or 8. In saying that, the alt-right movement is still young so we are still battling out our ideas. The alt-right movement is potentially at risk of being overrun by extreme white nationalists but as long as we are able to hammer out our ideas clearly and consistently, we will defeat extremist views. Basically, if you hang around alt-right websites you will see, hear and read some arguments that you will find too hard to swallow. This is not a bad thing; it just needs to be challenged. Alt-righters need to iron out these flaws or we risk being lumped into the same uncomfortable basket as ideological extremists.

So what is the alt-right movement? 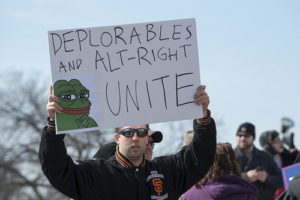 I’ve always seen the alt-right movement as a reactionary movement that has established itself in order to challenge views from the extreme Left that appear to have come into the mainstream over the last few decades. Alt-righters are mainly young white men who are tired of seeing their heritage and history taken from them by cultural Marxists. The views of alt-righters differ widely, from little more than conservative to borderline extremism. This is the battle of ideas that the alt-right movement has to fight out. The alt-right movement is not an extreme movement like the white supremacy movement, nor are we a conservative movement that will sit by while our world is taken away.

A very wise man once said “one day, young men will realise what has been taken from them, and they will be angry.” This was said almost 30 years ago, and at the time I was too young to understand what he meant, but the alt-right movement appears to be a manifestation of his prophecy. What alt-righters need to be careful to avoid is letting our anger cloud our vision. We’re not an extremist movement; we’re just trying to show that young white men are angry, and we have as much right to be heard as anyone else. This is why we need to battle out our ideas: our ideas are valid and reasonable (for the most part), and we are a large voting bloc and we should be heard.

How did I join the alt-right movement?

I have never actually joined any alt-right fan club, and I’m sure you haven’t either. I found the alt-right movement entirely by my own means, and if you’re reading this at XYZ you have probably found it by your own means too. I have spent many hours trawling through the internet and, like most people, over time I have slowly migrated to sites where my views are shared. I am not a racist, homophobe, anti-Semitic or an extremist in any sense. And I have become entirely frustrated when I see extremist, not-alt-right views published on what was once were breath-of-fresh-air alt-right websites.

What the alt-right movement is:

As I mentioned, the views of the alt-right movement differ widely and we are still a relatively young movement. To give an absolute definition of all arguments of the alt-right is beyond the scope of this article, but in essence alt-righters agree that: The new racism is bad. This is where white people (especially the much maligned white male) have their rights stripped from them. Alt-righters despise all racism no matter who is guilty of perpetrating it. We agree that passing a ‘yes’ vote on gay marriage will eventually erode a young man’s place in the world. Like all arguments listed, this would require many thousands of words to explain. Alt-righters also agree that unchecked immigration must be arrested for many reasons; again, these reasons are too many to explain here. But all alt-righters agree that cultural Marxism is distorting everything a young man should aspire to. By degrees this movement is unthreading our social fabric. Young white men see this and we’re angry.

Sometimes it’s due to some or all of the above reasons. Other times there are different causes of our anger, but invariably the root cause of the problem is cultural Marxism. All alt-righters share these views but what separates us is the extremity of our disagreement to these issues. Marxists have taken so much from us and now we’re angry. How angry we are depends on the individual, but we cannot let our anger corrupt our conduct. Unlike white nationalists, we do not think white people are in any way superior. We just want young white men to have their earned place in society – not some place that the whim of Marxists designates us.

What the alt-right movement is NOT:

The alt-right movement is not an extremist movement. We do not advocate racism or homophobia or anti-Semitism. A true alt-right follower does not look for enemies where there are none. Again, the alt-right movement is young but we should be arguing against the endless cultural Marxist ideology that has invaded and thus perverted the Western culture. We want to preserve what our forefathers have created. An alt-righter has no time for Leftist ideology and we do not advocate violence against people with whom we disagree. At the same time we don’t agree with those who pursue violence against us. Anyone in the alt-right movement who says otherwise should be spoken against and moved on to the extremist group or back to the mainstream conservative group. The only thing an alt-righter thinks superior to anything else is Western culture. That is not to say any race is superior, just Western culture; with all its achievements and imperfections.

The Left has (somewhat successfully) portrayed the alt-right movement at an extreme right-wing movement. This is not the case. We do not hate people for who they are, we just argue to be respected for who we are. After all, it was young white men who fought and died to establish these freedoms in the first place. Mostly the alt right movement is a reaction to the Leftist’s ideological forcing. If they would stop inflicting their views on people then our need to exist would cease. The alt-right movement is not violent or extremist, and people should be proud to be a part of it. The Left have tried to label us but do not be afraid. They will label everyone they disagree with as extremists, all the while becoming more extreme themselves.

The alt-right is not an extremist movement; even though the left will try to make out we are just because a few white supremacists have found a platform within our ranks. A true alt-righter does not hold an extremist view on anything. This means arguments advocating for extremism need to be challenged. There is nothing to be ashamed of in being proud of who you are. An alt-righter’s views are by no means moderate, but they are entirely rational views in this political climate and should be promoted.