Here at XYZ it’s fair to say we sometimes take issue with the way the mainstream media chooses to report on the extreme left.

In some ways with the group that chooses to call itself “Antifa” our fourth estate does slightly better than usual. I guess there are only so many times you can dress up in black masks and publicly gang bash people for disagreeing with you before even journalists begin to notice.

Some journalists at the SMH like Michael McGowan, Michael Koziol, and Peter Munro have tried to do basic research about the group as well as Kate Darvall at the Daily Mail and the ever impressive Chip Le Grand at the Australian. Surprisingly they get quite a few things right.

Sadly, academics like Troy Whitford of Charles Sturt University seem intent on muddying the waters, describing the ideology behind the group as “rather mainstream”, similar to “the policy platforms on the left of the ALP or the Greens”. He does make up for it in the same piece by reluctantly admitting that those who describe Antifa as a terrorist group [now including the U.S state of New Jersey and the Department of Homeland Security] may well have a case.

Considering that this group is willing to use violence to advance their political views it’s worth asking the question: what do they believe?

Short answer? Look at the logo. 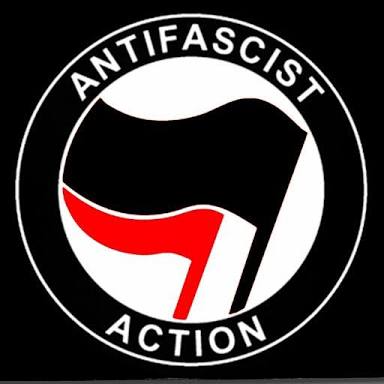 The Antifa logo consists of the black flag of Anarchism and the Red flag of Communism. It’s pretty fair to assume that most if not all people who claim to be Antifa are either true believers or fellow travellers to those ideologies.

People who try to fudge the issue by stating “it’s a tactic not a group” or by proclaiming that people marching under these flags are just mainstream leftists, need to explain what they would call non-Nazis who chose to march next to someone waving a Nazi flag.

What the hell is Anarchism?

Most people know about Communism, it was the ruling ideology that murdered 100 million people and terrorised a very sizable chunk of the world for most of the 20th century. Their semi-retarded black flag flying cousins are rather less famous.

I could go back and describe the doctrinal differences between Karl Marx and Mikhail Bakunin which led to the latter’s expulsion from the International Workingman’s Association at the Hague Congress in 1872. I could tell you about Pierre-Joseph Proudhon and William Godwin and trace the philosophical line between them and the brutal Anarchist militias that seized large tracts of territory under the banner of the CNT during the Spanish Civil War but in all honesty it wouldn’t make much sense.

The average Anarchist today has as much connection to those dusty, long dead thinkers as the average Aryan Nations prison gang member has to Friedrich Nietzsche. I’d be amazed if most of those who don black masks and call themselves Anarchists today could even tell you who Bakunin was.

Modern Anarchists just want whatever their better organised Communist cousins want, only instead of wanting to enforce absolute equality with a totalitarian state they want to use gangs of violent street thugs.

The average person who puts on a black mask and forms up with a group of people just like themselves and goes out to beat up political dissidents, attack police and break things isn’t thinking especially hard about why.

In short, modern Anarchists are just like modern Communists, only stupider, more violent and less organised.

When did they begin?

In Weimar Germany every political party had a militia. This rather regrettable system had come into place due to the fact that after the end of the First World War and the institution of democracy, the Communists immediately tried to overthrow the new government and institute a Soviet style state. When these efforts failed they began taking over working class neighbourhoods by beating up members of any other political party that tried to hold meetings there.

Eventually another up and coming political party realised that if they were tougher and better organised than the red militias they could contest those neighbourhoods and make a play for political power of their own. We all know how that story ended.

The original Communists paramilitaries were called the “Proletarian Hundreds” [Proletarische Hundertschaften] but as they existed almost entirely to beat people up they were unsurprisingly banned in 1923 after some of them tried [yet again] to overthrow the government.

Cleverly, they changed their name to the “Red Front Fighting Groups [Roter Frontkämpferbund] and continued their thuggish fun, fighting against police, Nazis, Conservatives, Socialists, Catholics, pretty much anyone really. This group grew until it had over 130,000 fighters, but just like its last incarnation it was banned in 1929 after a particularly bloody Berlin riot in which 30 people were killed.

By this stage the Brownshirts of the Nazis were really starting to worry the reds and the new names they slapped on their old thug-squads reflected this. In 1930 they chose the moniker “Fighting-Alliance against Fascism”, in 1931 “Red Mass Self-Defence” and finally in 1932 in an attempt to form an alliance with other parties of the left the Communists formed the original “Antifaschistische Aktion”.

As their logo they chose the double flag symbol familiar to us today, but both flags were red. The Communists might have been trying to attract support from outside their party but they certainly didn’t have any time for dirty Anarchists. 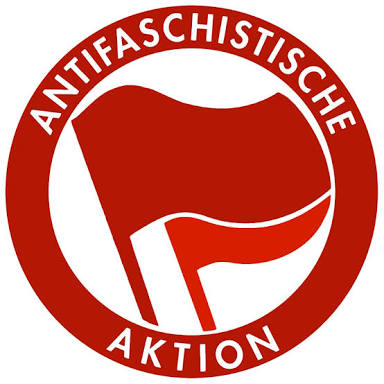 What has this got to do with today?

The modern Antifa groups have about as much connection to their Weimar era brethren, as that strange guy in armour, screaming while swinging a flail around his head at the renaissance fair has to William the Conqueror.

The modern group sprang out of the 80s punk scene when Anarchism first made a comeback as a pierced, mohawked street movement rather than a masturbatory philosophical exercise.

As punk became more and more politicised and the squat movement spread across Europe a small but steady stream of recruits for this new, edgy, I-hate-you-daddy brand of politics continued to flow through.

The modern, rather privileged kids who like to play radical today while clad in black have a rather curious tendency to live in the past. So much of modern Anarchism’s aesthetic is a strange mixture of The Clash and the Spanish Civil War [the last time Anarchism was relevant]. They even scream “¡No Pasarán!” the motto of the defenders of the siege of Madrid as their battle cry [someone should really let them know how that siege ended by the way].

While they bear both Communist and Anarchist flags the modern thugs align far more with the latter. Western Communists already have their deal. They’re quite happy with it actually, and sadly for the rest of us it seems to be going rather well for them at the moment. The reds refer to the Anarchists dismissively as “Lifestylists”, and they’ve got a point. Pretty much the only reason for the existence of this group in the modern world is a combination of what author Tom Wolfe called “Radical chic” and the attraction of being able to self-righteously attack police and beat defenceless people up without serious consequences.

They like to pontificate about how they are protecting minority communities from evil Australian racists but their average member is so white they’re basically see through. The communities they claim to be protecting didn’t ask to be protected and for the most part are more than capable of taking care of themselves.

As a former Melbourne native I find in particular the idea that the African community of Flemington, the Islamic community of Broadmeadows or the Vietnamese community of Richmond need defending by a bunch of bad-smelling, skinny-armed ideologues, to be quite funny.

Sadly, thanks to some establishment figures in our society being seemingly determined to try and normalise and promote these thugs, the rest of us need to start learning to defend ourselves as well, particularly those of us who have views these thugs consider worthy of a beating. If even the inoffensive daggy old dad of the Australian right Andrew Bolt is a legitimate target to these animals, almost no-one is safe.

Here at XYZ we have done our best to document and expose the far-left as the cause of almost all political violence in Australia, and the media’s seeming lack of interest in this fact. We deserve to live in a country where people with right-of-centre politics can hold meetings, speak our mind and even walk down the street without violence and intimidation.

At its core Antifa is about forcing all opinions other than their own out of the public sphere by means of mob violence. That is their purpose, tactic and creed.

Fortunately they seem to repulse people from across the political spectrum with their behaviour and demeanour. We can only hope that is enough to help stifle their aims.