Australia day gives rise to significant BBQ and social media chat on the subject of Australia’s indigenous people. Adding metaphorical fire to this particular incident was Tarneen Onus-Williams yelling “F**k Australia, hope it burns to the ground” during an Invasion Day rally in Melbourne. Needless to say this is a statement that wouldn’t gather popular support from Australia’s true sons and daughters. Despite the feelings of fury that arose in me as I read the Quadrant article on Tarneen and her various taxpayer funded activities, I am often loathe to participate in Facebook political discussions, however I couldn’t leave a particular “share” unresponded to. 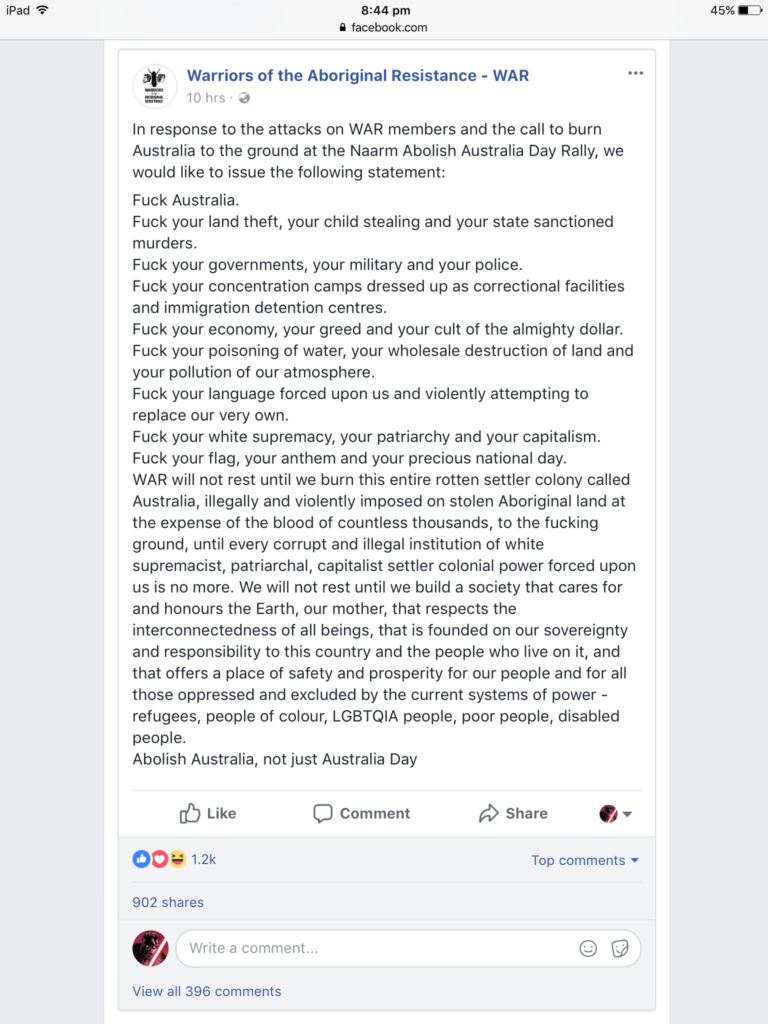 WAR in their own words, are “a collective of young Aboriginal people committed to the cause of decolonization and the philosophy of Aboriginal nationalism – resistance and revival”.

Putting aside that the post is the best example of Leftist intersectionality possible with all their various minority/victim causes well represented, I think it’s time to inject facts into this particular conversation.

Firstly, let us talk about the “almighty dollar” comment. If White Australia is so obsessed with dollars and ruthlessly capitalistic in their interactions with the indigenous people, I’d imagine we would be able to find some statistics showing an exploitative relationship.

Hmmm, so government expenditure is actually double the per capita rate for non-indigenous, so if that is oppression (as a fiscal hawk) I’d be more than happy for us to roll back this particular element of “white supremacy”.

So what about social welfare and cash transfers? You’d imagine based on the rhetoric of the WAR that Australia is quite stingy when it comes to it’s welfare entitlements for the Indigenous, but you would be wrong again. Australia not only ensures that all of its citizens have access to welfare but literally has a second system for indigenous people only. 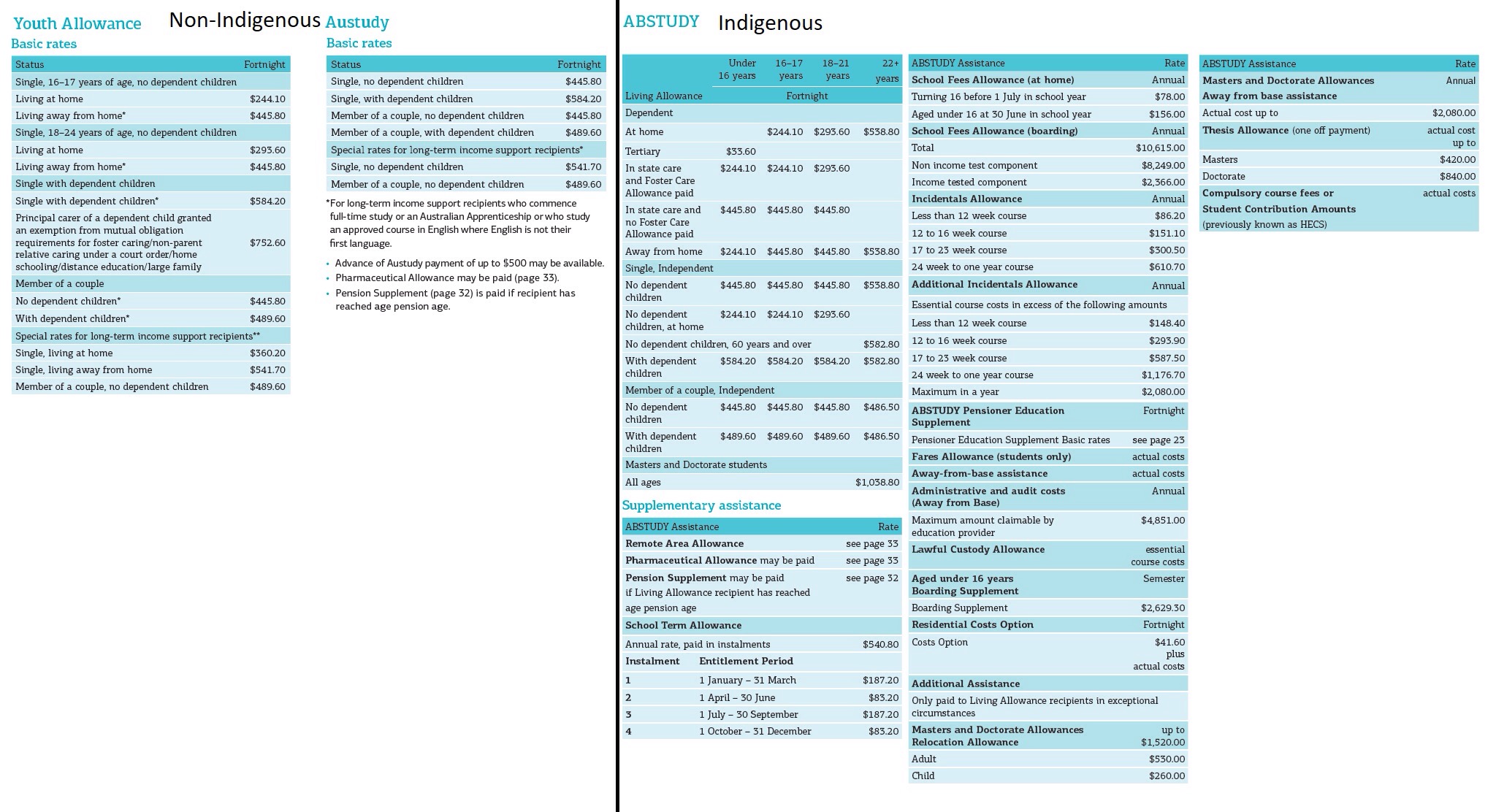 Two things stand out to me instantly, the presence of a master/doctorate payment under the Abstudy system and the whole additional host of incidental payments that Abstudy allows. The master/doctorate payment of $1,038.80 a fortnight is no joke, I believe it’s the most generous single social security payment in Australia, and it does strike me as a little unfair that it isn’t available to all Australians. But anyway I digress, I think I have established that the system Australia has doesn’t discriminate against Indigenous people, in fact there are several facets that are in fact more generous to Indigenous people or discriminate against non-Indigenous.

What about health services? I think we have all seen the Deadly Choices advertisements for the Aboriginal-only health/programs and services.

I personally don’t actually mind this, as governments should be able to identify areas of the community and administer relevant aid as required. However it does annoy me when it seems that help that is allocated based on criteria other than need. For instance, the Commonwealth Home Support Programme provides in-home services for persons deemed eligible by the government, helping elderly and frail people essentially. The eligibility is as follows:

Notice, for most Australians, unless they are deemed at risk socio-economically speaking (low income, homeless etc) they have to struggle through until they reach 65 years of age. If they are at risk, they can access it from 50. There is no such delayed entry for Indigenous people, who are eligible at 50 regardless of their means or income.

What about employment? Normally discrimination is illegal in Australia, “thankfully” the government carved out an exception to allow discrimination that aids indigenous and is against non-indigenous.

“A position identified for people of a particular racial background, such as Aboriginal or Torres Strait Islander people, can be lawful if it is taken for the sole purpose of advancement of a certain racial or ethnic group to ensure those individuals’ equal enjoyment of human rights.”

We have all seen the ads in the paper that specify the position is only for Indigenous people, but it could be worth perusing the Indigenous Employment Australia website to see the jobs that are not available for non-indigenous applications.

So in closing, I’d like to offer some unsolicited advice to the WAR collective:

Not just because there isn’t a system of oppression in Australia, but because their antics may even summon from the Australian consciousness the “hatred” they believe is already present.

WAR has expressed support for and participated in the burning of the Australian flag on several occasions.

That’s their right, I suppose. But would they be happy for me to burn their flag? I doubt it very much. In fact, I believe if I did so I would be subject of hate crime legislation relatively quickly.

So I ask myself, are WAR and Tarneen capable of acknowledging their own hypocrisy? Will they review the facts of their people’s oppression? Are they capable of negotiation or compromise? Do they even want to be citizens of this nation?

Because if not, I would be happy for Australian taxpayers to stop funding them, and they can burn all the flags they want, just not on my tax dollar and preferably not in the streets of Australian cities on our national day.