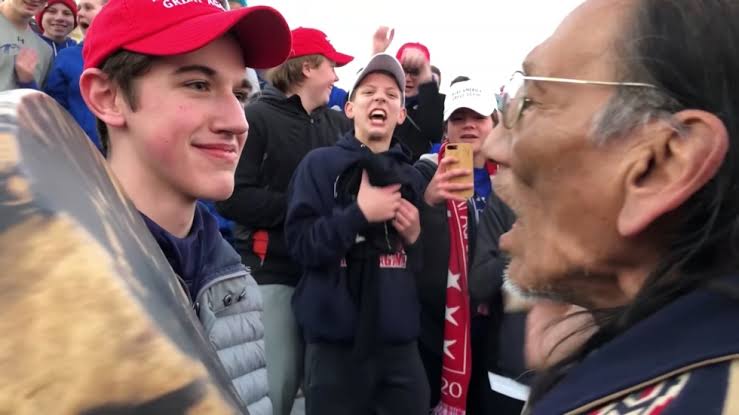 Hotdinger, humdinger! You gotta put on your native American clothes and go out and bang your drum. A real native American drum, covered in some sort of animal skin that PETA would normally protest about but we get a free pass because did I mention the native American part yet? And you gotta look old, preferably by being old. That way you can also demand the respect that is your given by virtue of the grey hairs on your balding head, the kind that looks like a bowling ball that needed a good polish but someone forgot to do it because they were watching reruns of I Love Lucy.

But you don’t just call yourself old, you call yourself an elder. That one is a beauty, you can take it to the affirmative action bank. Anyone who is old or at least has spent the past 20 years enjoying too many wines can join in the fun. Who’s going to dispute you when you refer to yourself as an elder? You’d have to be motherfucking crazy to put your poor dumb stupid white head in that noose. We’re elders so we be respected because we know stuff. Secret stuff that you cannot possibly know because we’re old and we have seen the dawn mists of time floating lazily in the serene waters of a lake that resonates to the sound of a native American flute and have I told you that we’re old yet?

You gotta sing too, well it’s a kind of singing. Just open your mouth and whatever comes out will be perfect because you’re a tribal elder and you know stuff, right? “Aiye-yie-yie-yieieeieieieie-yie-yah-yie,” something like that will put you right up there with Pachelbel’s Canon.

We got our jive, we got our groove, we been doing this for 40 years. We even got one of our guys who was in the Vietnam war. We been milking that one real good since that Platoon movie came out. Yes-siree, we are your ridgy-dige pure 100% unadulterated native crooks and con men, and if you ever even intimate that possibility then you sir are a goddamn racist, a white racist at that, think about that before you open your mouth.

And now we got ourselves a real life situation here, a pure coast to coast media revelation story that is gonna put our names right at the top where they belong. Whys, we’ll be able to milk this for all it’s worth and then some and then we’ll give it an extra squeeze for good measure. You see, we had ourselves some white boys who weren’t getting with the conquered peoples program. They had the temerity to stand there off to one side and chant their school songs and ignore us. Something had to be done, and we had native American tribal elder on our side, so we were basically invincible. We’d move over there, beating our drum, making our moaning sounds, and they’d have to back down because they’re the ones getting replaced now, right? I mean, even their own side is automatically against them when you put on tribal elder headbands and dance around with your hands in the air like a demented old hippie who forgot to put on his pants that morning. They needed some remindering.

So we went in there and the stupid Catholic white boys didn’t get with the program. Now whose fault is that? We can’t be responsible for what happens if they’re that stupid. But things took a life of their own, and sure we had those black Hebrew Israelites with us and they sure are as dumb as a bag of rocks, but they’re good for riling up a crowd against us that we can then use as ammunition but the dumb white boys just stood there and smiled, I mean who the fuck does that? And that one white kid, just standing there smiling at us, what a Nazi, only Nazis stand and smile when confronted by lunatic septuagenarians banging primitive drums and being more or less completely incoherent.

So we thought we’d make them back down and get out of our way as if we were going somewhere, even though he was standing directly in front of some tall monument thingy which kinda meant that even if he had moved, the continuation of my supposed journey would have been slightly tricky what with it being somewhat completely blocked by a stone monolith of rather large proportions.

Goddammit, these stupid white punks aren’t taking the bait, we better up the ante and tell them to go back to Europe and that their president is a fag. But they still didn’t take the bait but that’s okay cause we made it look good as gold, you know it, baby, we got this one in the bag, and so we got outta there faster than a Mexican going over a non-existent wall and we hightailed it around to some media idiots, and by golly gee whiz, how they lapped it up. I put on my best pained and scared tribal elder face and I told them how intimidated I had been and how those damn boys had mobbed and surrounded us and something about our native American nations and they ran with it and we got coast to coast, baby, coast to coast. Those boys never even knew what hit them. Stand there in silence and look at me with a smile on your face? How racist is that? I mean, how racist is that? The blatant disrespect and intolerance is just heartbreaking, you know the drill.

Oh we had a great laugh about it all over a few beers later with the boys. We just sat there glued to the Twitter streams as conservatives and Republicans everywhere fell over each other in a mad rush to see who could condemn the white kids more. It was beautiful to see, we even got their school to publicly apologise, which we secretly found hilarious because what the hell are they apologising for? I mean, the kids just stood there and looked at us. Hilarious. We even sucked in that Scott Dilbert guy who blathered on about the white kids being actual arseholes, I mean it doesn’t get much better than this. You should have seen what The National Review put up and how fast they got it there, yes sirree they sure were in a rush to believe that their own white folks were just the horrible horrible racists that they wanted them to be. Oh sure they’ve taken it down now, (the internet is forever), but it was glorious while it lasted, simply glorious. We’re the new super duper best ever tribal elders of all time, you had better believe it, where’s my peace pipe, Mildred?

Of course even if the truth did come out that we had orchestrated and provoked the entire thing and then accused the stupid white kids of everything that we actually did ourselves, it wouldn’t matter because our people suffered so much in the past, don’tchaknow, and we can continue to hold to our story no matter what “evidence” people bring to disprove us. If we have one little worry it might be that those dumb black Hebrew Israelite fucks that keep following us around put up their own video that they took, but nobody could be that stupid, right? Right?

Here is a video clearly showing that Nathan Phillips approached the students. On the basis of the evidence we now have, I believe that people who issued categorical and one-sided condemnations of the students should retract and apologize. pic.twitter.com/GxmXcMuQgC